How are driving habits changing, and will this affect parking?

How are driving habits changing, and will this affect parking?

People are fond of predicting disruptive change, and transport is no exception. If some people are to be believed we’re a few years away from a world where robot taxis and helicopters take us from door-to-door, making vehicle ownership – and therefore parking – obsolete.

Change is undoubtedly happening, some wrought by the pandemic. Data from the Department for Transport (DFT) in April 2022, as reported in the Economist, showed weekday car trips were around 90% of pre-pandemic levels.

This is a change, but it is not the end of driving and parking that some foretell. Further change is likely to be gradual, rather than a sharp drop off. This was backed up by our recent research amongst 2,000 people in the UK, which found around half of whom expected to maintain the same level of car use, and a sizeable minority (21%) expect to reduce their driving (remaining responses were don’t knows and N/A).

That does indeed suggest a gradual move towards less driving, but not an apocalyptic one.

The main driver seems to be increased working from home, rather than a shift to other transport modes. The number of respondents who expected to increase their public transport use was small (9%) and those who expected to increase shared mobility use (such as Uber) was negligible (1%). In fact public transport seems to have been hit harder by working from home – the same DFT figures showed weekday train passengers are at 60% pre-pandemic levels.

Those who operate parking spaces need to make these long-term projections about changing patterns and plan accordingly based on their own occupancy data and research. Changes will happen at different paces. In some cases, it may mean business as usual. In others, it may mean gradually transitioning some parts of some car parks to other uses such as cycle hire schemes or PUDO lockers. But we should not move too early – more drivers than spaces will always be a bad thing.

Change will be gradual. Disruptive decisions based on conjecture will cause more harm than good. Infrastructure is not tech. If we ‘move fast and break things’, then many – especially the most vulnerable – get left behind. A cautious data-driven approach to the use of parking space is the right one. 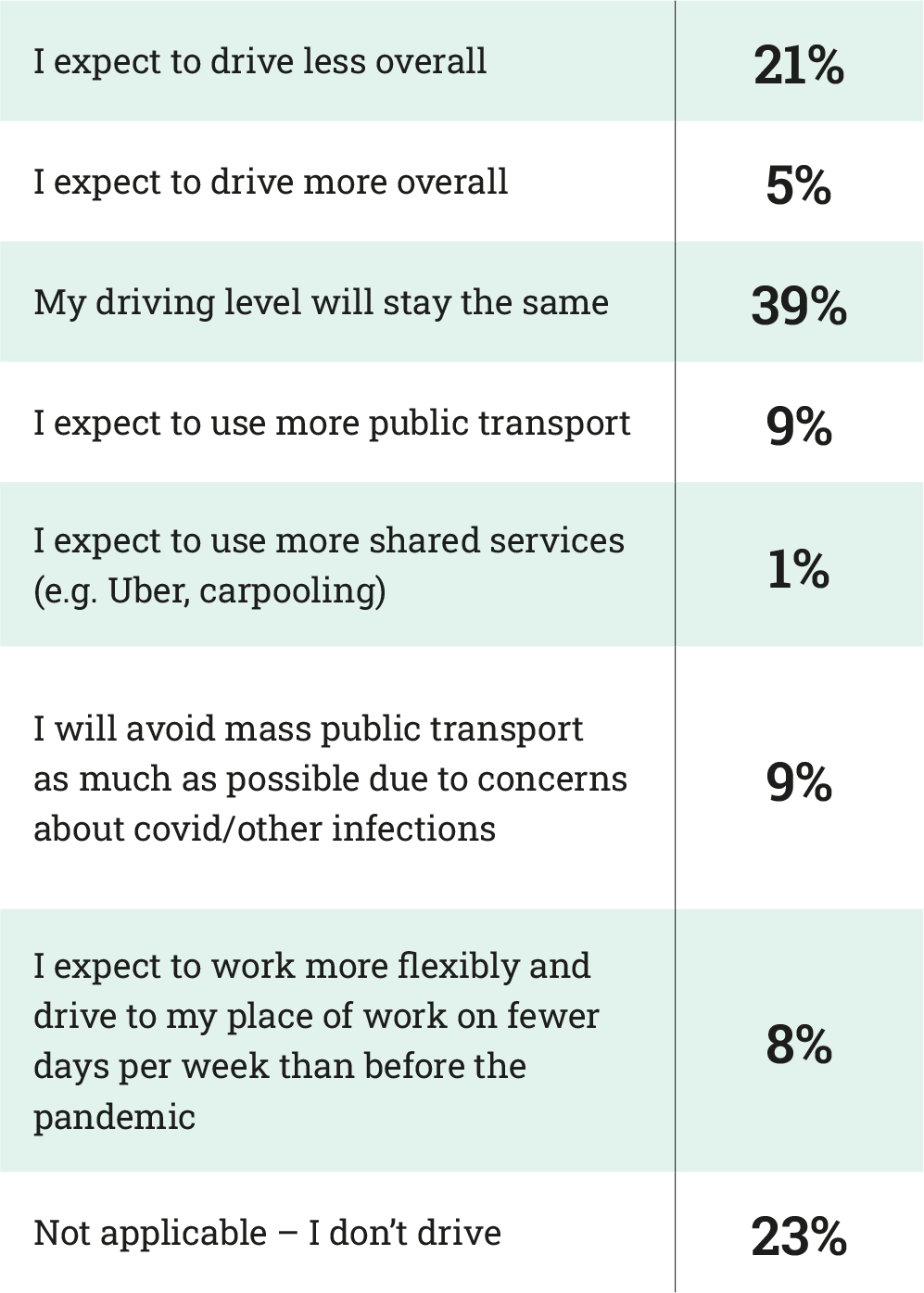 Read our full report: Parking and EV charging that works for everyone

Our total cohort for this research was 2,085 respondents of whom 67% were petrol or diesel drivers, 2% electric, 4% hybrid, and 25% non-drivers. Then remaining ~2% were split between rarer options including hydrogen and biofuels.

Book a no-obligation online consultation to explore financial and environmental options for your urban spaces with Flowbird.

This website uses cookies to improve your experience while you navigate through the website. Out of these, the cookies that are categorized as necessary are stored on your browser as they are essential for the working of basic functionalities of the website. We also use third-party cookies that help us analyze and understand how you use this website. These cookies will be stored in your browser only with your consent. You also have the option to opt-out of these cookies. But opting out of some of these cookies may affect your browsing experience.
Necessary Always Enabled
Necessary cookies are absolutely essential for the website to function properly. This category only includes cookies that ensures basic functionalities and security features of the website. These cookies do not store any personal information.
Functional
Functional cookies help to perform certain functionalities like sharing the content of the website on social media platforms, collect feedbacks, and other third-party features.
Performance
Performance cookies are used to understand and analyze the key performance indexes of the website which helps in delivering a better user experience for the visitors.
Analytics
Analytical cookies are used to understand how visitors interact with the website. These cookies help provide information on metrics the number of visitors, bounce rate, traffic source, etc.
Advertisement
Advertisement cookies are used to provide visitors with relevant ads and marketing campaigns. These cookies track visitors across websites and collect information to provide customized ads.
Others
Other uncategorized cookies are those that are being analyzed and have not been classified into a category as yet.
SAVE & ACCEPT
Powered by